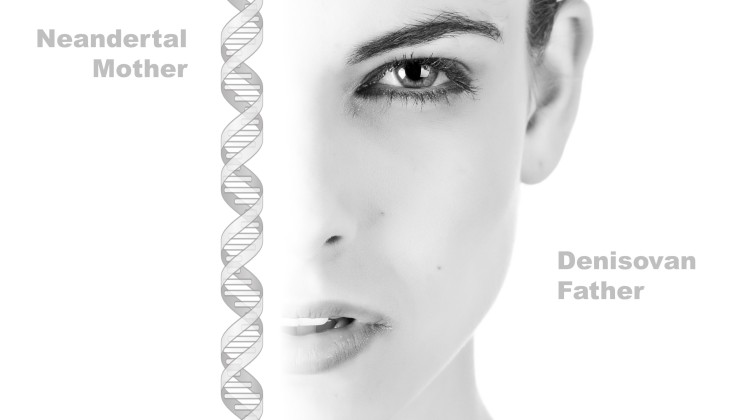 A new report in Nature online details a remarkable fossil discovery of a girl who had a Neandertal mother and a Denisovan father.  Neandertals were an ancient people that were probably cousins to modern Homo sapiens (Homo sapiens look like us). and because of ancient intermingling, some Neandertals were actual ancestors of people from Europe, Asia, or North Africa.  I carry genes from my own Neandertal forebears.  Denisovans were also an ancient people group for which we have almost no fossil evidence.  A few teeth and a finger bone are all that we know of these people, but their DNA is strikingly different from our own and from Neandertals.  Like Neandertals, they also intermingled with the ancestors of modern humans, specifically those who come from Papua New Guinea.

This new report from Viviane Slon and colleagues describes the discovery of a small fossil bone in the famous Denisova Cave in Siberia.  The fragment was only an inch or so long, but biochemical tests indicated that it was probably human.  DNA sequencing revealed mitochondrial DNA of the Neandertal type, but the full genome revealed something remarkable.  There were as many sequences from the genome that matched Denisovans as there were sequences that matched Neandertals.  These Neandertal and Denisovan sequences weren’t concentrated in patchy segments on the chromosomes, either, which would imply that the parents were hybrids.  Instead, the Neandertal and Denisovan DNA sequences were evenly distributed throughout the genome.  The individual had a genome that was half Neandertal and half Denisovan!

The thickness of the bone implies that the girl was only 13 years old when she died. We know she was a girl because the frequency of DNA fragments recovered from the X chromosome matched the frequency of DNA fragments recovered from every other chromosome. She had two X chromosomes just like she had two of every other chromosome. Her Neandertal mitochondrial DNA was inherited from her mother, as all mitochondrial DNA is.  Her mom was a Neandertal.  The other half of her DNA came from her father, a member of the mysterious Denisovan people.

Looking even more closely, Slon and colleagues noticed a few, very small chromosomal segments where there were almost all Neandertal DNA and no Denisovan DNA at all.  These regions appear to be bits of Neandertal DNA she inherited from her Denisovan father.  So her father probably had Neandertal ancestors, too.

Denisova Cave, where this little girl’s remains were found, is the only place the remains of Denisovans have been discovered.  To date, the extremely fragmentary remains of four Denisovan individuals have been discovered, and the cave has also yielded Neandertal remains.  Despite overwhelming indirect evidences of ancient human hybridization, this is the first direct evidence of these very different peoples having children together.

There has been one other fossil discovered with evidence of ancient human hybridization.  A 2015 study described the genome of a Homo sapiens fossil found in Peştera cu Oase, Romania that had large segments of Neandertal DNA.  The size of the segments revealed a Neandertal in that person’s recent ancestry, possibly a great-grandparent.  Altogether, scientists have sequenced 23 really ancient human genomes (conventionally dated to >40,000 years old), and the fact that two of them were recent hybrids (Oase and this Denisova girl) implies that ancient human hybridization was somewhat common.  It might actually be surprising why modern people don’t have more Neandertal or Denisovan DNA.

What do these discoveries mean for our theology?  How does this hybrid girl affect the image of God?  Honestly, she doesn’t really change anything.  We’ve always known that humans were diverse, and these new discoveries have shown us that we’re actually even more diverse than we thought.  We’ve also known for many years that Neandertals, Denisovans, and Homo sapiens could all interbreed, because they were all humans.  According to our best creationist understanding, Neandertals and Denisovans are descendants of Noah.  They count Adam and Eve as their original parents, just like we do, and they are the image of God, just like we are.

Creationists still need to work out how Neandertals and Denisovans came to be so genetically different from Homo sapiens.  My own research suggests that there must have been a time of higher mutation rates right after the Flood, but that was very preliminary work.  I’m looking forward to future research that will help us unravel the mysteries of these ancient people.