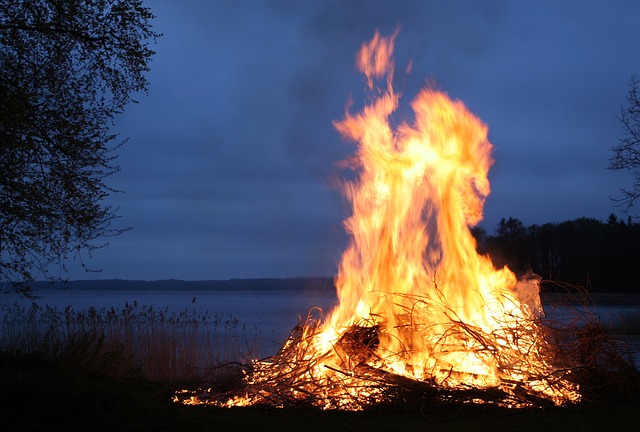 When did people start making fire?  The earliest discussion of burning or fire I can find in Genesis is Noah’s sacrifice after the Flood.  We might presume that the offering that sparked (see what I did there?) Abel’s murder was also a burnt sacrifice, but Genesis doesn’t say that.  It just says they brought offerings.  So Noah is the earliest (Gen. 8:).  The next mention of burning is the baking of bricks at Babel (Gen. 11:3).  By the time the narrative focuses on Abraham, he seems very familiar with fire. [EDIT: My readers reminded me of Tubal-Cain of Genesis 4:22, the “forger of all instruments of bronze and iron,” which definitely requires the use of fire.]

So how does that relate to the fossil record?  There are a number of really “old” sites (conventionally speaking) that contain evidence of burning that may or may not represent deliberate fires set by ancient humans.  Koobi Fora, with a conventional date around 1.5 Ma, has a few sites with evidence of burned stones and clay.  The famous Zhoukoudian site just west of Beijing has contested evidence of burned bones and ancient hearths have received considerable attention from anthropologists in recent years.  The purported fire evidence at Zhoukoudian has a conventional date of about half a million years ago.

Other sites have more clear evidence of intentional fire use by early humans.  Wonderwerk Cave in South Africa has evidence of ash that was buried in a cave, suggesting that some form of human made a fire in the cave, at a conventional date of 1.0 Ma.  In Israel, burned wood and flint with a conventional date of 700,000 years ago have been found at a site called Gesher Benot Ya’aqov.

When Neandertal fossils become common, scientists acknowledge that they commonly used fire.  The question remains, though: Could they make fire?

The challenge with all of these sites is demonstrating that hominins were intentionally making fire.  For example, how do we know that fire wasn’t just captured from wildfires and kept around?  Or maybe the evidence of fire wasn’t even local?  Maybe the ash and char washed in from somewhere else during a heavy rain?  What kind of evidence could we use to demonstrate that ancient people really made the fire themselves.

Enter the research of Sorensen and colleagues.  They began their research by examining known markings on Neandertal stone tools.  The main tool they looked at was the basic biface, a tear-drop shaped tool presumably used as a hand-held cutter.  Some of these tools were known to have tiny marks on them, streaks that looked like something might have been scraped or struck against the biface.  They speculated that flint bifaces could be used as opportunistic strike-a-lights when hit by a piece of pyrite to make sparks and fire.  In other words, instead of carrying around a special piece of flint just for making fire, they just used whatever flint tool was handy.  Could these marks on Neandertal bifaces be connected to the marks on a piece of flint used to make fire?

To answer that question, they created their own bifaces and used them to make fire with pyrite.  Sure enough, the marks they observed on their modern bifaces matched marks seen on the Neandertal bifaces.  They reported that the marks on some ancient bifaces even showed them how the Neandertal would have held the biface while striking it.  On some tools, they could even tell which hand the Neandertal used to strike with!

They have a lot of comments about what these results might mean for Neandertal fire use and fire traces, but I’m mostly interested in what else they’ll find.  They do mention looking at other stone tools (like Acheulean tools of Homo erectus) but finding no similar traces of pyrite striking.  I’m sure they’ll keep looking though.

Finally, what does this mean for creationism and the Genesis references we saw at the beginning of this article?  I’m not entirely certain, but I can offer some comments.  First of all, these Neandertal stone tools are post-Flood and probably post-Babel.  I would assume that Noah knew how to make and use fire, since he offered a burnt sacrifice after the Flood.  At Babel then, perhaps the ability to make fire was lost among some of the language groups (perhaps even many language groups), meaning that the ability to use fire needed to be re-discovered.  Perhaps that is what we are seeing now with these Neandertal tools.

On the other hand, we don’t really know how far back fire use goes.  Those sites mentioned above have ambiguous evidence of intentional fire use, but “ambiguous” means it could go either way.  Those ashes and burned bones might not be from human burning, but they also might be.  Even if we found no evidence of strike-a-lights among Homo erectus remains, that still doesn’t mean they couldn’t make and use fire.  It would just mean that they didn’t do it that way.  Of course, we’re getting dangerously close to pure speculation here, which is undesirable.  I think it’s better to say that fire use may have been lost at Babel among some language groups and then later recovered.

Don’t take my word for it, though.  Read the original research report for free at Scientific Reports: