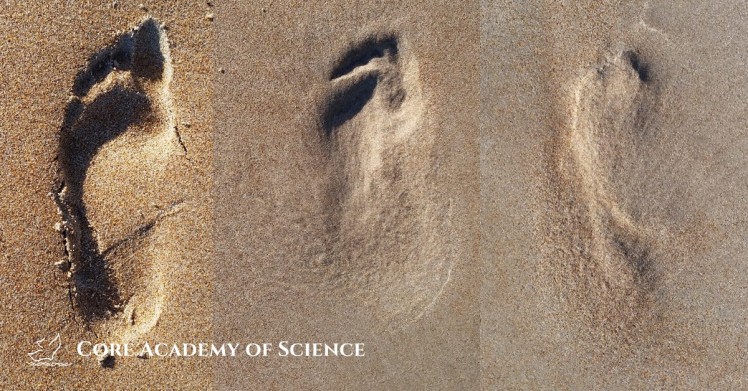 A couple years back, my wife and I visited the beach, and I began to observe the quick erosion of footprints in the surf (because that’s what I do on the beach, that’s why).  Even the clearest prints were washed away in minutes as the surf kept pounding the sand.  It reminded me how ephemeral such tracks can be, which makes it all the more astonishing when fossil footprints are uncovered.

In a new research paper, Hatala and colleagues report some genuinely striking human tracks from Engare Sero, a location near the southern shore of Lake Natron in northern Tanzania.  There are multiple sites that preserve trackways at this location, but only one that preserves human trackways.  The others have tracks of typical African animals, like zebra and buffalo.

The site with the human tracks has a bit of a fuzzy dating, most likely because they are relatively recent, as far as fossil tracks go.  Attempts to directly date the site revealed a range of possible dates between about six and twenty thousand years old, and the authors conclude that the tracks are probably on the older end of that range because of a layer of calcite that they associate with an expansion of the lake when the trackways would have been under water.  That expansion they date to about 11,000 years ago.  For those interested in such things, that places these tracks in the very upper Pleistocene.  These, of course, are conventional dates by conventional dating methods.

Perhaps the most striking thing about the tracks are their uniformity.  Hatala and colleagues report 408 different human footprints that fall into about 23 separate trackways, and they are very nearly parallel.

With such clear tracks, the researchers could estimate the individual walking speeds of each track. They found that the people walking to the northeast (to the beach?) were walking at variable speeds. Some were strolling along, others were walking more hurriedly, and at least one was running. The tracks aimed to the southwest (away from the beach?) were all walking at a uniform casual pace.  Sounds like pretty typical beach walking to me.  People are excited to go to the beach, but they’re tired out and walk more slowly on the way back.

This set of tracks is just one of several important trackways known along the African Rift Valley.  Much farther north, you’ll find Melka Kunture in Ethiopia.  There, there are not only tracks but also stone tool remains, all of which have been conventionally dated to 700,000 years ago.  They were likely made by someone other than what we know as Homo sapiens; they might represent Homo erectus. 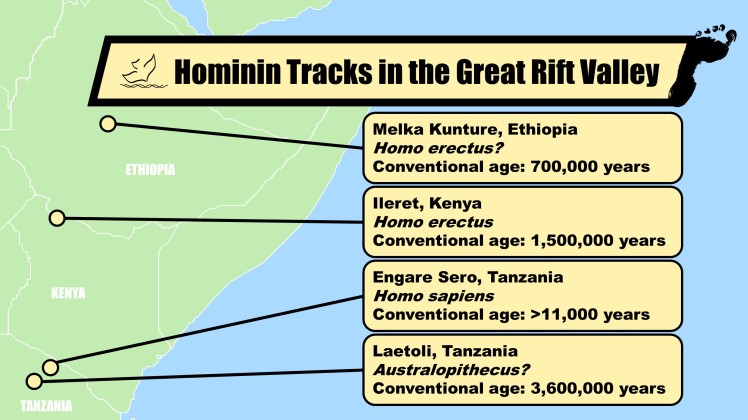 In northwestern Kenya, near the shore of Lake Turkana, a site near the village of Ileret preserves more Homo erectus tracks.  At a conventional date of 1.5 million years, these tracks are more than twice as old as the Melka Kunture remains.  They are across Lake Turkana from the location where the famous Homo erectus skeleton Nariokotome Boy was discovered.

Further south, very close to the recent Engare Sero tracks, we find the famous Laetoli trackways, conventionally dated to 3.6 million years.  These trackways have been examined by many researchers, and they do not appear to match either the shape or the gait of modern human or modern chimpanzee tracks.  These bipedal creatures are usually described as Australopithecus afarensis, more because paleontologists don’t know precisely what else was alive then than because there is a direct association of fossils and tracks.

As a creationist, I continue to be amazed by the discovery of ancient trackways.  Unlike fossils, these remains give us clues into behavior of these ancient people.  Apparently, they liked the beach just like we do.

I’m also delighted at the recency of these discoveries.  With the exception of the original Laetoli trackways, all of these sites were reported since 2016.  If there’s one thing I emphasize again and again, it’s how much there is still to discover in God’s creation.  Think of all the contributions that could be made by young creationist researchers!

The odd bit are the Laetoli tracks (see my previous essay on these tracks).  I’ve expressed before that I’m convinced that Australopithecus were habitually bipedal, which means that these tracks could have been made by something that isn’t human.  Recent discoveries of humans with skeletons that are quite different from ours, like Homo naledi, suggest that we shouldn’t be too quick to judge a creature as not human just from their foot anatomy or their gait.  That makes a lot of sense.  I wouldn’t want to judge whether something is human or not based solely on a tooth or an arm bone or maybe even a footprint.  We need to look at all the evidence.