From now to March 22, visitors to the Perot Museum in Dallas have the opportunity to see something exceedingly rare in the United States: Two hominin skeletons from South Africa.  By a special arrangement with Wits University in Johannesburg, the remains of MH-1 (Australopithecus sediba) and LES1 (Homo naledi) are on display in a special exhibit called “Origins: Fossils from the Cradle of Humankind.”  I had the privilege of visiting this exhibit last weekend, and I’m happy to share some of my observations.

The exhibit costs $10 in addition to the regular museum admission, and it’s located one floor down from the main entrance.  Each ticket is for a specific time to enter the exhibit, but it was not crowded nor did I have any trouble getting my ticket at the main entrance (instead of purchasing ahead online).  Upon entering the exhibit, you watch a short movie narrated by Lee Berger that describes the discoveries of A. sediba and H. naledi.  After the movie, you move into the first exhibit room, which contains the skeletal remains of “Karabo,” the nickname of the Australopithecus sediba specimen MH-1 (see close-up at the top of the article). 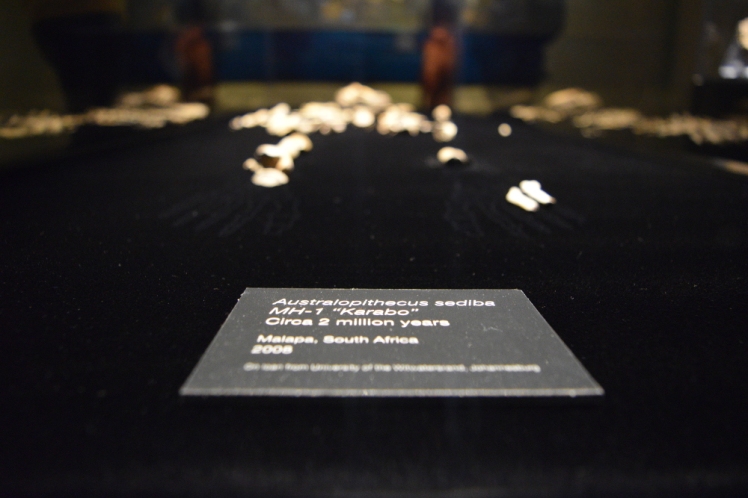 The remains are visible in a plexiglass display case, arranged on black velvet with the faint outline of a skeleton to give you a sense of what it might have looked like when it was still intact.  The specimens are well-protected with what looked to be a two-inch plexiglass shell and a guard watching at all times.  Also present in that room is a block of additional fossils from the same locale that have not been completely removed from the rock in which they are embedded.

What’s the story here?  I’ve written extensively about the discovery of A. sediba on my personal blog (here, here, and here), and you might wish to read some of those articles for more context.  Briefly, the remains of A. sediba were discovered back in 2008 at a site called Malapa, about ten miles northeast of the famous cave Sterkfontein, where many other hominin remains have been found.  The skeleton on display in Dallas was a juvenile male, but the remains of an adult female were also found.  Like other hominins, A. sediba exhibited traits that would allow them to habitually walk upright.  My continuing study of A. sediba indicated that it was a member of the extended human family – not an evolutionary intermediate or cousin, but a branch of humanity descended from Adam and Eve.

Moving on from that room, the exhibit next focused on the Rising Star Cave, about ten miles from Malapa, where thousands of remains of Homo naledi have been discovered.  Since my time at the museum was unfortunately limited, I did not linger long in that room but moved on to the final room in the exhibit where the skeletal remains nicknamed “Neo” were on display.

As I entered that final room, my attention was immediately drawn to the new reconstruction of a Homo naledi male standing in a case directly across from the entrance to the room.  It’s pretty.  It’s obviously made to look more human than the reconstruction that National Geographic commissioned back when the fossils were first found. 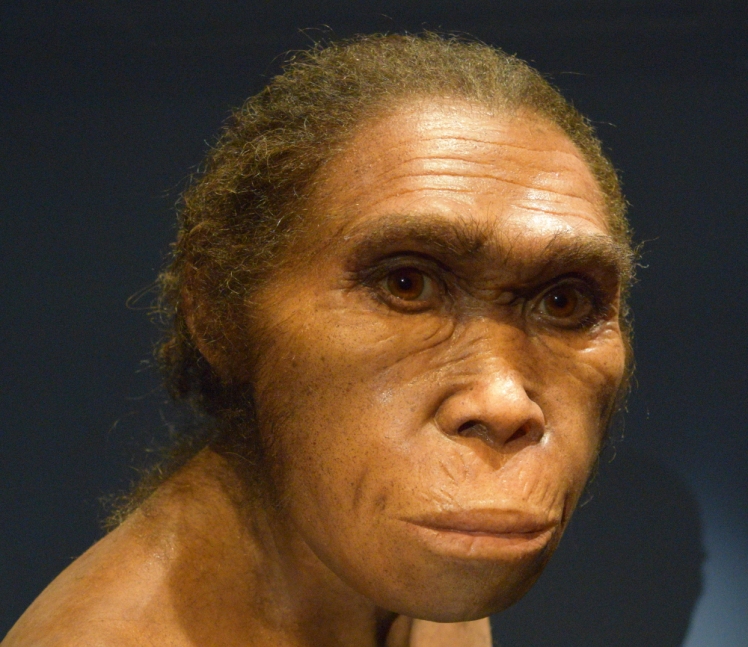 Reconstructions are interesting, but I was there for the fossils.  Like the other skeleton, Neo is laid out on black velvet under thick plexiglass, and there was a guard observing everything I did.  You immediately notice here that the Neo skeleton appears a bit more sparse than the A. sediba skeleton, but it’s also helpful to remember that unlike A. sediba, there are many more remains of Homo naledi in addition to Neo.

For those who don’t recall, the big story with Homo naledi is the “intentional body disposal” model for how so many remains ended up in the cave.  You can read more about that here.  Based on the skeletal characteristics and burial behavior of Homo naledi, I continue to hold that Homo naledi was a human descendant of Adam and Eve.

And that was my visit.  I spent about an hour examining and photographing the specimens, and then I had to head out to go home.  This was a pretty exciting visit for me. I’ve spent a lot of time studying the reports and photographs and 3D scans of these fossils, and to finally see them in person was a big deal.  They’re real.  I know that sounds odd to say (of course they’re real!), but I’ve encountered a distressing number of fellow creationists who are quick to dismiss hominin fossils as fake, frauds, or hoaxes.  When I talk about the exciting discoveries, they bring up Piltdown man (a fraud exposed in 1953), as if that is emblematic of paleontology in its entirety.  Having seen them in person, I am confident that they are real and not plaster sculptures.  Creationists need to move on to interpreting these fossils: What or who are they?  How did they get to Africa?  Where do they fit in the timeline of creation?  These are worthy pursuits.  Griping about “fake fossils” is not worth the time.

Overall, I am very glad I had the opportunity to see these fossils in person.  Thanks to all who made this exhibit possible.