The recent discovery of the Denisovan Xiahe mandible brings to mind the question of how the Denisovans compare to other hominin fossils.  In this image, we have replicas of six different hominin jaws to scale, and we can begin exploring the similarity and diversity of these ancient fossils. 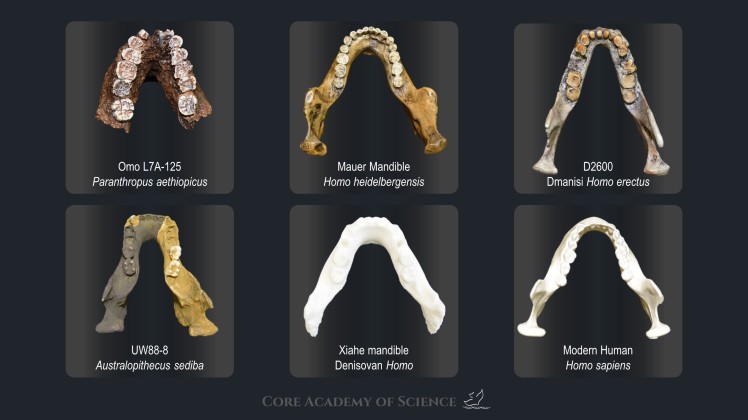 The Xiahe mandible appears bottom center with a modern human immediately to its right.  We can see right away that the modern human jaw is thinner and more delicate than the Denisovan jaw.  The thickness of the Denisovan jawbone makes sense, since the original tooth specimens were known to be surprisingly large.  Large teeth would imply a large jaw, and so it is.

Look a little more carefully, and you’ll also notice the shelf of bone behind the front teeth on the Denisovan specimen.  That same shelf is missing from the modern human mandible, where the bottom of the jaw sweeps forward to form the chin.  Looking at all six mandibles in the picture, and you’ll see that the modern jawbone is the only one that has a chin.

The other three fossils shown in this image represent much greater diversity than the Xiahe, Mauer, and modern mandibles.  On the top right, we have the Dmanisi mandible D2600.  This is strikingly different that any other hominin known from the fossil record.  As we can see, it is much longer and narrower than the three we have already looked at.  D2600 matches a cranium labeled D4500, and together, they have come to be called simply “Skull 5.”  Skull 5 is big and thick and possesses surprisingly large jaws, even when compared to the other four skulls found at Dmanisi.  Researchers continue to ponder whether the five skulls from Dmanisi represent a single species or more than one.

The jawbone on the upper left was discovered in southern Ethiopia in the Omo River basin.  Dubbed Omo L7A-125, the mandible is extremely thick and heavy, with teeth larger than the Denisovan Xiahe mandible.  These large mandibles and teeth are typical of a group of hominins called Paranthropus.  All specimens from this group possess not only large jaws but also large and prominent muscle attachment sites on the skull where the jaw muscles would attach.  These features would make Paranthropus very good at chewing and grinding food.  Research published in 2011 revealed the likely presence of grass in their diets, which would explain why they would need to grind their food so much.

On the bottom left is a reconstruction of the mandible of Australopithecus sediba, which also has some striking differences.  This reconstruction suggests that the teeth rows were more square than the rounded appearance of the other mandibles in the image.  We need to be cautious comparing this specimen directly to the others, however, since this A. sediba jawbone is from an immature individual.  Some of the differences might be due to growth rather than genuine differences between species.

What does this mean for creation?  Based on the consensus of creationist thought, we can say at minimum the Xiahe and Mauer mandibles are also human descendants of Adam and Eve.  My own personal research has indicated that the Dmanisi skull 5 and A. sediba are possibly human as well.  The only mandible in this image that is unmistakably not human is the Ethiopian Paranthropus mandible.  As I look at this image, I am reminded that modern human diversity is only a small part of what once was.